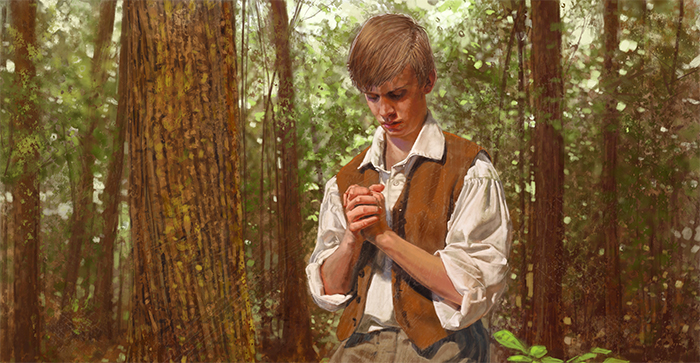 
On this video in the Evidences series, I’m going to talk about two miracles that happened in the early life of the prophet Joseph Smith.

The first was the surgery on Joseph Smith’s leg from osteomyelitis that Joseph contracted as a result of the typhus fever epidemic that was going through the area where they lived. It was West Lebanon, New Hampshire. This was when Joseph was seven. His family was living there, and it was swept throughout the area of this upper Connecticut valley. Many of the members of the Smith Family contracted the disease. Sophronia, his sister, almost died from it.

Joseph, he had the typhus fever. It went down into his left leg and the disease went into the bone and it is called osteomyelitis. The procedure for this was amputation. That’s really what any doctor prescribed for this. A doctor came and met at the Smith home with Lucy, in particular, and Lucy would not have this for her son. She asked for a second opinion, and another, in fact, a group of doctors came, medical students from the nearby school, the Dartmouth School of Medicine that had been established by Nathan Smith.

Nathan Smith had a procedure. It was an experimental procedure of operating on the bone. He was the only doctor in the country that performed this surgery. It was a way to potentially save the leg from amputation. Lucy agreed to this, and Joseph agreed. His conditions though were interesting. Normally, the procedure involved tying down the person to the bed, spread eagle, and then administering alcohol there to help ease the pain. Joseph said he wouldn’t have either. He just wanted his dad to sit with him on the bed, and his mom to be out of the room as the procedure happened.

So they went forward, this procedure was successful, and the recovery was pretty lengthy. Three years that it took, Joseph with crutches, and he had, in fact, always had a limp the rest of his life. It was slightly shortened leg from this surgery.

Some particular miracles about this, in particular, related to the fact that Nathan Smith who was essentially the only doctor that could have performed this surgery was five miles from the Smith home. Nathan Smith was not supposed to be at Dartmouth at this time. He’d agreed to go help start the medical school at Yale, but his family had contracted the diseases there with the typhoid fever as well, so he was delayed in going. That is why he was there at the time.

This procedure turned out to be almost 100 years before its time. In fact, there was a medical journal in 1876 that talked about this procedure and recommended not doing it because it appeared that Nathan Smith was the only one that could successfully do it. Thousands of people lost their legs during the Civil War from osteomyelitis there from amputation.

It did come around and began being practiced during World War I with the invention of the x-ray machine. Later, Penicillin was invented in 1828 and really began being applied in 1842, and the surgery was essentially lost to time.

I truly see this as miraculous in many ways. The fact that Nathan Smith lived five miles from the prophet Joseph Smith. He was delayed from going. He shouldn’t have been there at the time. He was 100 years ahead of his time. He was the only one in the entire country that could have performed the surgery. It really is quite miraculous that Joseph was able to keep his leg. Even in World War I when they did perform this surgery, there were many complications and many fatalities in performing this operation. Really it is quite a miracle.

The second miracle I just want to mention briefly because we know very, very little about this. It was just a short paragraph in Lucy Mack Smith, the prophet’s mother’s journal about when Joseph was 14. This was several months before the first vision, that’s a key note to be aware of; there was an assassination attempt upon Joseph’s life. One night, he was coming home; it was about twilight. He was just coming into the door, and two shots were fired right at Joseph. They both missed him, but Joseph jumped into the house and they closed the house up. The next morning, they went out to try and see if they could see anything that had happened. They saw tracks and positioning that looked like somebody was underneath a wagon close to the house where they were positioned; looked like trying to kill Joseph. Two shots fired.

You have to say why. This really would be a strange. There would be no reason for anyone to try and kill Joseph Smith, but this was several months before the first vision. Another divine intervention, I believe, in preserving the prophet’s life, to prepare him to restore the church to the earth.

Joseph Smith’s Doc Only Man Who Could Save Leg – Deseret News Jul 12, 2008: https://www.deseretnews.com/article/7…